In July, the pit wall for the prototype of Ecovat was drilled, which made the final shape of the vessel become visible. For the first time in their history, the company of Wedam realized the first ‘round’ wall of the Ecovat. This process found place in a very limited workspace.

With the aid of a so-called Soilmix machine, two cutter wheels were placed in the ground. After reaching the desired depth, the cutter wheels were pulled up while the soil was further mixed. By connecting the wall panels in the ground, a complete wall was formed. In order to achieve the correct height and flatness of the wall, the top side was scraped off. This has realized the wall that will soon be the ground barrier and dam for the Ecovat.

During the milling, the strength and dimension variables were continuously recorded to control any malfunction. Also, the necessary facilities required for the continuation of the process have been introduced. Examples are the reinforcement for the connection on the screen and the slope tubes that will soon be necessary to be able to monitor the behavior of the wall during the excavation. The excavation of the pit will be conducted as late as possible, now planned in the second half of September. 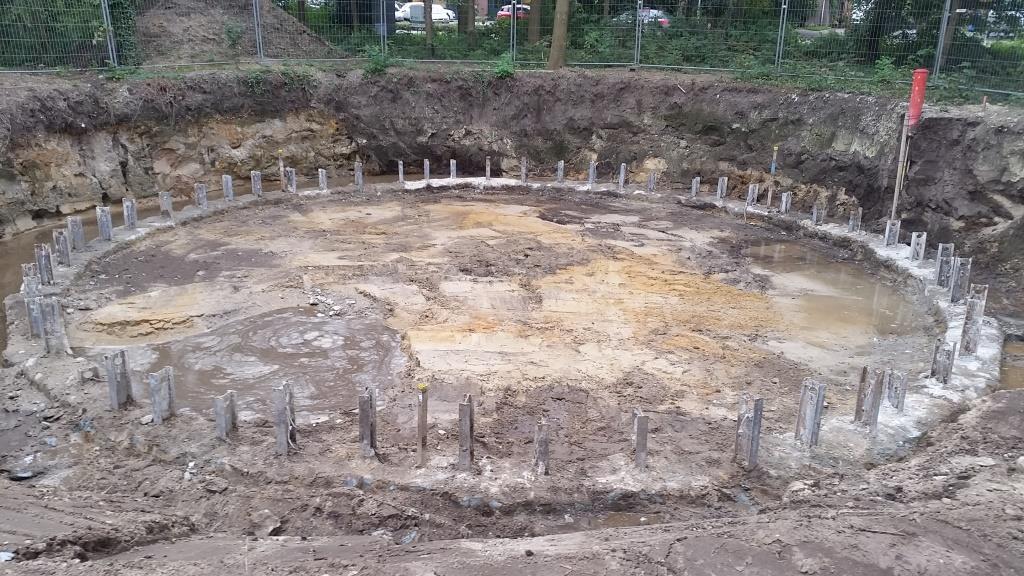 Behind the scenes we are now working hard on the next stage of the project. In consultation with the manufacturer, consultants and contractor we are looking for the most optimal method for manufacturing the insulation panels, which will form the interior walls of the Ecovat. In September, the first test panel will be placed. It is expected that the walls can be placed in their final location in October. After that the Ecovat can be closed and put into use.